Rev. John H. Gray of Vicksburg came to Memphis to hold evangelistic services with the goal of organizing the new church as a result. He held the meetings in a warehouse on the bluff in front of the Gayoso Hotel, which at that time faced Front Street. 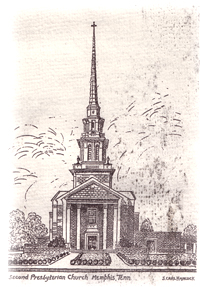 On Saturday, December 28, 1844, Second Presbyterian Church received 21 members and held election of officers. The next morning, the Sacrament of the Lord's Supper was celebrated in that same location. Within a few months, the warehouse could no longer hold the congregation, so they rented a building at the corner of South Front and Beale. Soon thereafter, they purchased a lot at the northeast corner of Main and Beale, and in June, 1846, the cornerstone for a new building was laid.

By early 1888, the neighborhood around the Main and Beale site had become a noisy business district and the congregation began planning another move. They purchased property at the northeast corner of Hernando and Pontotoc Streets. The first service was held in the new building in October, 1892. This building still stands today, with Second Presbyterian Church etched into its stone edifice. 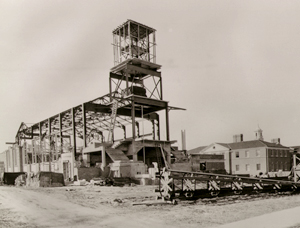 By the mid-1940s, the congregation was planning to move once more. This time, 7.5 acres at the corner of Poplar and Goodlett were carefully chosen with an eye toward future growth. The Sanctuary building was finished in 1949, and here we have remained. We are glad to have our church home in the heart of Memphis and thankful for the opportunity to worship and serve here.

In 1989, Second voted to join the Evangelical Presbyterian Church (EPC) denomination, and we gladly participate in the leadership, support and growth of our denomination.

Second has an approximate membership of 3,000, and over the past several years the average age of membership has grown younger. The church’s culture is vibrant, with a high priority placed on growing and maturing in our faith and serving the needs in the community and world around us.